At the same time when I ordered the ILER 20 MK2 kit, I also orderd the ILER-DDS 0-40MHz VFO/DDS KIT which IMHO would be a nice aditions to the shack. Not knowing if I would use it stand alone as a RF generator (would be a nice adition to my FT301 as a second VFO) or add it to the ILER 20 MK2 to get more tuning range (the VXO had a range of aprx. 60 Khz). The kit contains all the parts need, so it's just a case of assembling it all together. 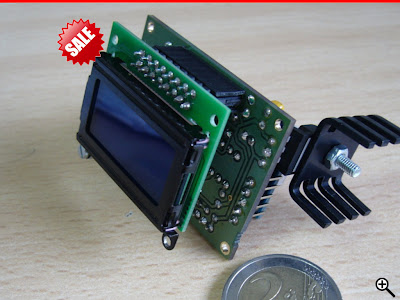 A rainy afternoon was the correct moment to sit down in the shack and take a few hours to assemble the kit.

I would recommend reading the manual at-least once to get the general idea about the assembly order (trust me, Javier knows best).

First a few resistors and the small capacitors get there place.

Next the headers for the DDS board and the IC socket. For the IC socket I would recommend using the more expansive models.

Installing the LCD connector strait up can be a little tricky but using a spare dubbel row header does the trick.

The same counts for the LCD header. A small piece of experiment PCB makes the mouting easy.

And after soldering a few wires to the connection header, it all comes together.

Well there have been a few setup steps before this picture was taken.

But hey it works and that whats counts.

A few more pictures of the DDS.

Note : what may look like a shorts between the pin headers aren't. They are reflections of the resistor wires.

Next project : construction of the ILER 20 MK2.